ACCESS NL > Features > The centenary of the Peace Palace

The centenary of the Peace Palace 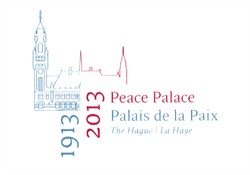 The words Imagine and Peace go together like a hand in a glove but this is not too big a dream. If even the Taliban can sign up to the UN international Day of Peace as they did in 2012, then so can others. The endeavour and continuing process to find worldwide peace is celebrated with a series of events at the centenary of the Peace Palace.

Learn from the past but look to the future and find new solutions as to how to bring peace, this is what institutions based in The Hague seek to do everyday. Whether it is an non governmental organisation (NGO) working with children in a war torn land or lawyers seeking to bring another miscreant to justice, The Hague IS a Powerhouse of Peace. Thousands of people working within 160 international organisations like the International Court of Justice of the International Court of Arbitration strive everyday towards a safer world and a more just world.

Numerous notables throughout history have endeavoured to bring peace and have often given their lives for it. Andrew Carnegie gave instead his attention and funding to build the Peace Palace in The Hague with one condition, that a library be built linked to the palace. This inspiring building and institution will be 100 years on 28 August 2013 and is an international symbol of the enduring struggle for peace. The first Peace Convention was held in The Hague in 1899 with 26 countries taking part to discuss peace and disarmament. Thus the decision was made to establish the Court of Arbitration in The Hague and the idea for the Peace Palace as ‘a temple of peace’ was born.

Events will start in April with a Peace Gallery Challenge art competition and a commemoration of Thomas Mawson, the landscape architect of the Peace palace gardens. Others celebration events include a performance of ‘Peace of Me’ by Hague secondary school students, seminars in July and August and a Peace palace exhibition with curiosa depicting the palace. Symposia and debates will also play a big part in the celebrations with discussions such as ‘Facing the Future of International Justice’ on 9 September.

On the actual centenary day of 28 August, a two-day conference entitled ‘The Hague approach – achieving sustainable peace-building’ will kick off the main celebrations.

Pink Floyd and the Residentie Orchestra will both headline events on 14 and 15 September leading up to the Peace Run and The Peace One Day Celebration concert 2013 on the UN International Day of Peace on 21 September in the palace gardens. Tickets for the limited concert will go on sale on 1 May and the concert will be live streamed around the world so that everyone can share the celebration.

For a full listing of the events, check the event website.

One person really can make a difference; actor turned filmmaker Jeremy Gilley started the non-profit organisation in 1999 with the idea of making an annual day of ceasefire and non-violence.

In 2001, the UN’s member states unanimously adopted the day on 21 September as Peace Day – a day of ceasefire and non-violence. Jeremy recounted with patent delight and pride, the success in 2012 when even the Taliban agreed to observe the Peace Day. A 70% reduction on violent incidents was recorded in 2012 on Peace Day. With approximately 4% (280 million people in 198 countries) of the worlds 7 billion population is aware of Peace Day which will help with Peace One Day’s objective of making Peace Day 21 September self-sustaining. By institutionalising it as an annual day of global unity, this date will become a day of intercultural cooperation on a scale that humanity has never known. Peace One Day organises concerts and other events through many platforms and different scales to raise awareness and observance of Peace Day.

The theme for this year is ‘Who Will You Make Peace With?’

With the success of the CPC run 2013 just round the corner, Like2Run and Haag Atletiek will organise the Vredesloop on 21 September. The runs are for distances of 1,5 and 2,5 (for children), 5 and 10 km in which 5,000 runners per run can participate. The run will start and end from The Peace Palace. Haag Atletiek, a local athletics club is also celebrating its hundred-year anniversary and will partner up with Like2Run to organise the event.

Get Hooked on Surfing in Holland

What better to wash away the blues than by diving with a board on a hot Dutch summer’s day (Yes,...

Coronavirus: We are in this TOGETHER

The Covid-19 pandemic has thrown us all into flux. As we wait at home, hoping that everything will improve, our...