BSN: Hockey at the BSN – building on a host nation’s passion | ACCESS

Being located in a country that’s almost fanatical about hockey provides The British School in the Netherlands (BSN) with a solid foundation from which to generate significant interest in the sport from a relatively young age. 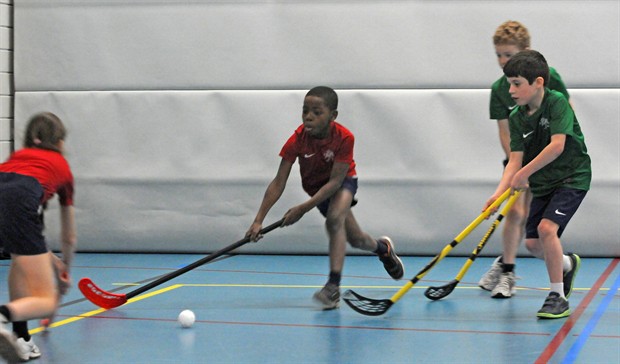 The after-school hockey club has established itself as a popular part of the Junior School co-curricular programme. Coach and former semi-professional Australian Hockey International, and BSN Director of Extended Day Programmes, Jessica Monkivitch, explains the rationale “through the junior after-school hockey clubs, we aim to develop basic hockey skills and an understanding of the game, building on what students learn in their PE lessons. As hockey is so strong in the Netherlands, the club further exposes students to the sport, many of whom go on to join a Dutch club outside of the school, or take up the sport when they reach Senior school.”

Dutch hockey success is related to the outstanding club network that encourages boys and girls across the country to learn hockey from the age of six. BSN Senior School PE Teacher and Hockey Head Coach Nicola Stronach explains “The BSN has taken advantage of the Dutch hockey infrastructure with its link to the club MHC Forescate in Voorschoten. The school Hockey Club fields five girls teams and competes in the Dutch league as a part of the Voorschoten club. This amalgamation brings both the benefits of Dutch sports club life and our own special international school culture.”

Last year the BSN Under 18 Girls team successfully defended their Internatio-nal Schools Sports Tournament (ISST) title, claiming a well-earned Gold at the championships for an unprecedented fourth consecutive year. The BSN also holds the record for the highest number of titles overall, having been crowned ISST Champions on an impressive fourteen occasions.

The BSN offers all students with an interest in hockey the opportunity to participate in the sport regardless of level or ability as Nicola Stronach explains further, “whilst the league is competitive, our school club programme remains inclusive, with many students arriving at the BSN having never played hockey before and developing into players who later represent us at ISST level and go on to succeed at both University and senior level. Our unique position of playing as school teams within a Dutch club creates a wide range of opportunities for our -students. Regular coaching, clinics with current international players, and strong parental support has contributed to our continued success in the International School circuit – and the reputation that the BSN has now established for developing high class competitive hockey players.”

Initial conclusions (March 2019) of a mental health survey, conducted by Healthcare for internationals (H4i) at the end of 2018,...

Take your pick: Orchards in the Netherlands for delicious fun outdoors

Dutch gezelligheid seems to be as much about being indoors and cozy in town as it does...

IamExpat: The go-to website for all your international needs

Over the last 10 years, IamExpat has helped millions of internationals with everything from updating them on the latest news...