Do you think about a hofje as a group of small houses built around a common courtyard, founded by a rich person, offering free housing to poor older women? You are right, but there are also hofjes, which have a completely different origin.

In fact there are four kinds of traditional hofjes:

These hofjes were founded from the 12th to the 14th century for women who wanted to live in a religious community, primarily to look after the sick. The women, called Beguins, were not nuns. They had to be unmarried, make a vow of chastity and promise obedience to the parish priest. They however did not have to take a vow of poverty. They could renounce their vows at any moment and leave the Beguinage, for instance to get married. There have been quite a lot of Beguinages in the Netherlands, but there are only a few left in Amsterdam, Delft and Breda. Nowadays there are no Beguins any more, and the remaining Beguinages are used to host activities to remember their cultural and religious history. 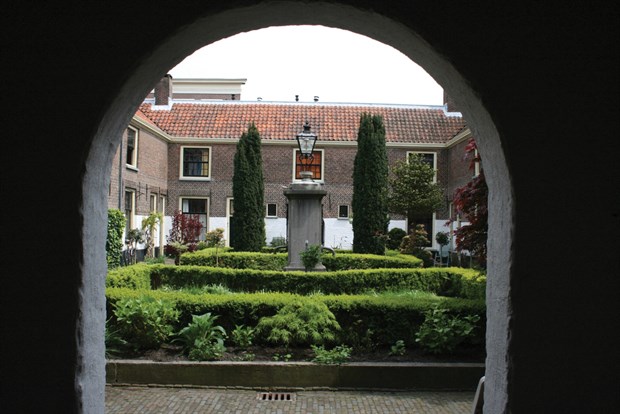 These hofjes were primarily founded in the 17th and 18th century and were built around a square courtyard. The founder was almost always a rich person who offered free housing to poor older women. The almshouses were controlled by regents who were authoritarian in their behaviour. The construction quality of the houses were good: sometimes an architect was involved. The living rules in an almshouse were very strict: the women must return home before 22.00 and could only spend a night elsewhere with special permission. Male guests was not allowed. The inhabitants also needed to follow the same religion as the founder and going to church was compulsory. Not all poor women were allowed to live in an almshouse. You needed to be well born and your references were checked. An example of an almshouse is the “Hofje van Nieuwkoop” at the Warmoezierstraat in The Hague.

Hofjes for the lower working class

These hofjes were built in the 19th century behind large city houses and could be entered through a gate between two city houses. The houses were rented out to lower working class people at high prices, since making a profit was very important. The construction of these houses was very poor. During the building process, cost cutting was seen as very important. The hygiene arrangements were very bad, i.e. there was just one toilet for all the houses together, which was not connected to the sewerage and was often situated near the well. As a result, epidemics, of cholera, for instance, very often occurred.

In the 1970s, many of these hofjes disappeared due to city renovation. Nowadays, the hofjes that remain have been renovated and are often inhabited by young people. An example of this kind of hofjes, is “Hofje Mallemolen” at the Mallemolen (near Javastraat) in The Hague.

These hofjes were built by the housing corporations, for the working middle classes, towards the second half of the 18th and the early part of the 20th century. Concern about poor living conditions lead to the quality and facilities of these houses being much better than those built for the lower working classes. This was the beginning of social housing as we know it. An example is the “Fort” at the Parallelweg in The Hague.

Hofjes in the 21st century

Nowadays, we see architects building more modern hofjes and They seem inspired by the social needs of the hofjes’s inhabitants. An example is the Green almshouse in Ypenburg (The Hague).
Cities that still have several hofjes are Groningen, Amsterdam, Utrecht, Haarlem, Delft, Leiden and The Hague. In these cities, there are often guided tours around several hofjes. Contact the local Tourist office for more information.

For 75 years we have been free to live as we want to. That is something to cherish, to protect...

How to survive working from home

Due to the Coronavirus, most of us here in The Netherlands will still be working at home for a much...