Mahatma Ghandi once said, “Live as if you were to die tomorrow. Learn as if you were to live forever.” Many internationals live by this motto. They live life adventurously; and often these new adventures include the pursuit of knowledge.

They may be thinking about continuing their education so they can keep abreast of the latest research and protocols. This is especially important for teachers, business personnel, and other professionals who need to keep their skills up-to-date. It may also mean expanding their personal interests and skills to broaden their perspectives and open their minds. In a world that is constantly growingly globally; broadening ones learning horisons is imperative.

Many people know ACCESS as the grassroots organisation of volunteers that helps new comers adjust to living in the Netherlands. However, in addition to ACCESS’s enthusiastic team of around 130 volunteers, ACCESS also has a Community Education Department (CED) whose main focus is to help internationals gain knowledge.

Once someone has settled and the basic needs of adjusting to life abroad have been met; many internationals find that being “settled” isn’t enough; they realise this is the perfect opportunity to develop new skills.

This is why ACCESS trainers are an integral part of the ACCESS team. They provide trainings across a wide spectrum of interests one may have during their stay, be it 2 years or 20. We are continually recruiting trainers that provide comprehensive learning opportunities regarding childbirth & parenting, personal development, job seeking, languages & culture, as well as health & wellbeing.

ACCESS and VUDH know that internationals find it a perfect time in their lives to focus on development. Following courses that teach new languages, that teach new skills, improve public speaking, or upgrade computer skills can be essential in increasing job opportunities or perhaps even helping someone change careers.

Any international will tell you that it is easy to become isolated. Part of what ACCESS CED and VUDH wish to do is to broaden international’s experiences. Taking courses expands professional and social networks as well as increases the understanding of local networks, be they cultural, school, or parental.

Who and what is VUDH?

However, it is best to learn about an organisation from the people that value it most. ACCESS took the time to Interview Mark Vermin, director of VUDH to find out about this community institution.

What is VUDH’s mission for the community?

VUDH is an institute for non-formal education, which offers opportunities for further development and training in languages, arts, culture, science and creativity. The course programme does not aim for formal qualifications or official certificates, but offers possibilities to spend free time in a useful way. Never-the-less, Volksuniversiteit Den Haag has been recognised by the BNVU and meets all kinds of quality standards relating to the care of students, teachers, facilities and training programs. Volksuniversiteit Den Haag is a not-for-profit organisation, which prides itself on being open for everyone, regardless of previous training, age, religious or political background.

Please share some of intriguing history about VUDH and how it got started:

The origin of Volksuniversiteit lies in the UK where Arnold Toynbee led a group of scientists who were worried about the division of society, with university trained scholars on the one hand and the “unknowing folk” on the other. In the 1880s, he became the example for Oxford teachers and students who started teaching labourers in their spare time. Transferring knowledge without the pressure of exams. Germany, Belgium and Denmark followed soon after.

In 1913 professor Steinmetz founded the first Dutch Volksuniversiteit in Amsterdam. He chose this name for several reasons; by ‘volk’ (lit. folk or people) he meant everyone, including people who had no access to higher education, regardless of their religious or political background. The word ‘universiteit’ is used in its original meaning, universitas, i.e. the harmonious, systematic unity of sciences.

Den Haag was the largest Dutch volksuniversiteit in the 1920s. Thousands of students found their way to the courses and lectures and, later, the radio broadcasts (RVU, now part of NTR, stands for Radio Volksuniversiteit). The board consisted of VIPs such as Hélène Kröller-Müller and mayor Herman Van Karnebeek and they had a beautiful office on Lange Voorhout.

In the 1970s VUDH, still heavily subsidised at that time, was forced by the municipality to merge with a few other welfare and cultural organisations into Haags Cultureel Trefpunt (HCT). In the 1990s things got worse and in 1999 the municipality dismantled HCT, thus also ending VUDH.

Within a few months, a group of former teachers made a new start and founded a new VUDH. The number of participants grew from about 700 in the first year to over 3000 in recent years.

Steinmetz’ mission still stands, but has transformed into the more general ‘talent development’ and in the European context ‘lifelong learning’.

Courses in Dutch as a foreign language have been part of the programme since the 1980s. Over the last few years other courses for non-Dutch speakers were added, language courses such as English, Japanese, Russian and Spanish, but also other courses in arts, culture and personal development.

For many courses, a good command of the Dutch language is required (B2/C1 level). For some courses, however, a basic knowledge will suffice (think of creativity courses like painting and photography).

If people wish to contact you, or learn more about the courses you offer what is your contact information?

Many thanks to Mark Vermin, director of VUDH for providing his time and expertise for this partnernship and for this article. 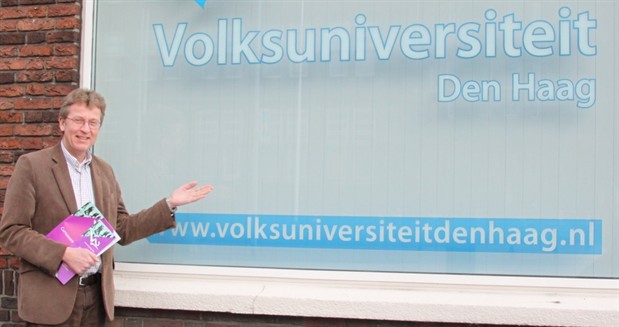 First published in ACCESS Spring 2018 magazine       What can I say about the International School...

For the last couple of years, Japanese citizens were exempted from having a work permit to find a job and...

V!VA. Tools for Well-being By Katarina Gaborova | with Photographs by Vikram Anil Vyawahare and Conny Mages, Petrabooks, 2015. The...